DRIVERS have been given an extra four months' grace over the imposition of €11 fines for not carrying breath tests - and the law may even be scrapped.

A shortage of tests across the country has prompted the interior ministry to delay the start of the fines until March 1 and Interior Minister Manuel Valls said he wanted to use this interval to evaluate the usefulness of the law.

Alcohol is implicated in one in three fatal road accidents and is involved in the deaths of three people each day.

The law says that all road-users - even tourists - must carry an éthylotest to help them check that they are fit to drive. Only cyclomoteurs - two-wheelers of under 50cc - are exempt.

Introduced by then interior minister Claude Guéant, it came into force on July 1 but its full effects were delayed until November 1 to allow manufacturers to supply enough kits.

However, only two manufacturers make kits to the Norme Française demanded and French company Contralco and South African Red Line have not been able to supply enough products.

When MPs passed the law kits cost only around €1-€2 but now the shortage of supply has seen prices hit €5 in some shops.

Valls said that before March 1 he wanted to have a new look at the law along with road users' groups and victims' groups. The Ligue Contre la Violence Routière has already attacked it as just a "little cosmetic measure".

The legal limit for driving in France is 0.5gram of alcohol per litre of blood. A driving ban is not automatic for drivers who go over this limit - they risk losing six points off the 12 points on their licence and a €135 fine.

Anyone driving with more than 0.8g/l must go to court and risks losing six points, a three-year driving ban, a €4,500 fine and two years' jail.
Posted by Simon Kerridge at 7:55 am No comments: Links to this post

I have just been instructed to sell a lovely, 85 sqm 2/3 bed village house with roof terrace in the pretty village of Campagnan for a very keen price of €129,000 !!!

You will not see many quality properties with outside space in good condition at this price so watch this space..........
Posted by Simon Kerridge at 3:52 pm No comments: Links to this post

We have just been instructed to sell a charming 3 bed, 100 sqm house with pretty garden in the village of St. Thibery, just outside Pézenas. Watch this space for full details. 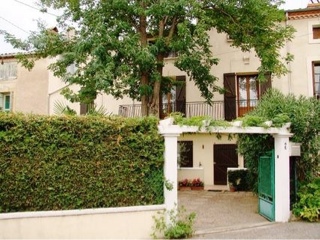 Posted by Simon Kerridge at 11:43 am No comments: Links to this post

Now that the sun has come out again I have just re-taken a photo of this amazing roof terrace in Neffies.

This superb village house is certainly one of the best I have ever seen and needs to be viewed to be appreciated.

CLICK HERE to see a full presentation of this languedoc house for sale or call me to chat about it.

Well it certainly has been a while since I have posted to this blog, fortunately this has been because I haven't had the time.

The summer months for Languedoc Property Finders have tended to be fairly quiet compared to other times of the year. I put this down to the fact that most people who are here in July and August are here mainly for the beach rather than looking for property. The most serious buyers tend to come out to look for Languedoc property in the spring and then again in the autumn. This year however, has been an exception to the rule. This year we have had a very busy summer period with plenty of sales being agreed and a pretty decent amount of new stock coming online.

In addition to this, Languedoc Property Finders has started to expand into the Narbonne area. Headed by John Bartram who has lived in Narbonne for years, we have started to develop a portfolio of good quality properties in Narbonne itself as well as the surrounding areas.

Some of our most exciting new stock recently has included:
To see all our lates properties for sale follow this link.
Posted by Simon Kerridge at 9:17 am No comments: Links to this post